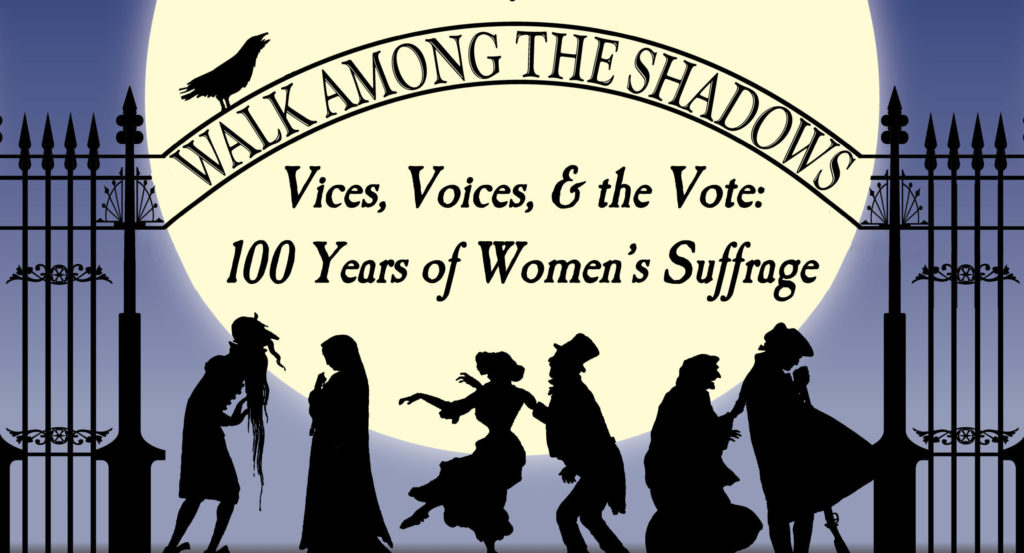 Each year in late October spirits arise in Eastern Cemetery Portland, Maine to share stories of their eventful lives. In 2020 they agreed to appear virtually so you can hear their tales first hand, but safely from home. Their video will be available for free, but only from October 22-November 7 at SpiritsAlive.org/Events (be sure to check out the trailer there)

7 eerie spirits will share their stories of the voting practices of their time in Portland, Maine, as well as those of the country’s early days. You’ll hear about their efforts to win women’s access to the ballot box… or how they argued against the very idea. As always, the event presents real people—portrayed by costumed actors—who have returned from their restful sleep to offer perspectives on history in a very personal—often humorous—manner. The stories were written by Lynne Cullen who also directed the event as best she could—you know spirits… sometimes they listen, but mostly they just wail. Hannah Rafkin is the mastermind behind the video and editing of the spooky event.

Not only is the event virtual this year, it’s FREE! due to support of Spirits Alive’s generous sponsors, and a grant from the Maine Arts Commission, an independent state agency supported by the National Endowment for the Arts.

Eastern Cemetery was founded in 1668 and served as Portland, Maine only burying ground for nearly 200 years so now is the resting place of as many as 7,000 individuals. That number is a ‘guesstimate’ since the space never was laid out as a cemetery, the city’s earliest residents had far more pressing concerns than keeping records and there was no local stone carver until 1800, so only those who were economically well off could afford to purchase markers of stone, usually from Boston merchants. About 3,900 remain.

Spirits Alive is an all-volunteer non-profit formed in 2006 to preserve and protect this historic site, All donations and funds raised through tours and events throughout the year are used to repair markers, improve the grounds, and support educational and promotional efforts. We are a 501(c)3 organization. Donations are tax deductible and greatly appreciated.