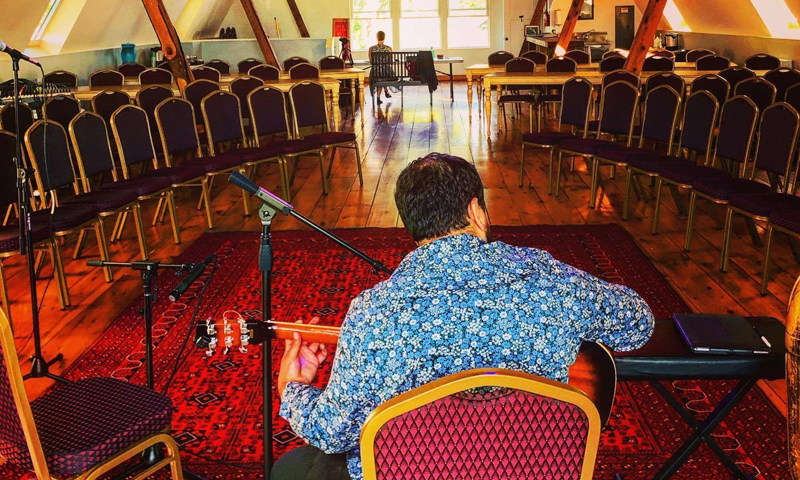 The HAYLOFT at Dragonfly Barn is a beautiful restored barn with pristine acoustics that brings music lovers and performers together. A listening room that is inviting and intimate, it is a magical place to enjoy a concert or celebrate a milestone.

Peaceful Means – 4/30: The original spark between these two soul-sisters would reignite now and again over the years, in various and brief musical projects that would bring them to venues from New England to Florida to the Rocky Mountains, and to sharing the stage with such world music greats as Baba Olatunji and Paul Winter.

Low Lily – 5/22: With a vocal blend that has been dubbed “outstanding” and “meticulous,” Low Lily’s cohesive sound comes naturally for musicians whose lives have been entwined on the road and onstage for almost two decades.

Heather Maloney – 5/29: Heather’s songs have played on NPR stations across the country and her live appearances have aired on syndicated programming like eTown and AudioTree. Her song “Nightstand Drawer” was used in the season finale of the CBS TV series “Elementary”, and her songs have also been featured on a number of editorial Spotify playlists & Starbucks’ in-store nationwide playlists.

House of Hamill – 6/11: Whether they’re ripping through a set of original jigs and reels, adding lush three-part harmonies into traditional folk ballads, or cracking up an audience with stories from the road, House of Hamill puts on a show that captivates audiences from the very first note.

Songs from Here – 6/18: “Songs From Here” is a project put together by Maine-based musicians (soprano Sarah Tuttle, pianist Bridget Convey, and composer Erica Ball), intended to cultivate and celebrate locally-written and performed poetry and song.

Antje Duvekot – 6/26: Antje Duvekot has solidified her reputation as one of Boston’s top singer songwriters with “Big Dream Boulevard” her debut studio release and “the Near Demise of the Highwire Dancer” and “New Siberia” her follow-up albums.

Portland Piano Trio – 7/16: Known for the sensitivity and vigor of their playing, the Portland Piano Trio has been called “one of the stand-out chamber music ensembles in the state.” This critically acclaimed group consists of Tracey Jasas-Hardel, violin; Wayne Smith, cello; and Anastasia Antonacos, piano.

Heather Pierson Trio – 7/23: Hailing from New Hampshire’s Mount Washington Valley, the Heather Pierson Trio brings their multi-genre musical skills to bear on original songs and choice covers that bring to life the sounds of the streets of New Orleans, the valleys of Appalachia, and everywhere in between.

Sam Robbins and Halley Neal – 7/31: Both outstanding artists on their own with exciting new albums releasing this spring and summer,  Sam and Halley are combining forces. They will each do a short set of their own music, then finish up performing as a duo. Each set a unique musical experience.

Local Artist Spotlight – 8/13: Some of our best talent is found right here at home! An evening of music and original compositions by local artists.

Clare Longedyke – 8/20: A passionate soloist and chamber musician recognized for her colorful musicality, technical fluency, and ability to interpret repertoires across the musical spectrum.

South for Winter – 9/3: The trio released their debut album Luxumbra in October 2020, which was recorded in Nashville with GRAMMY award-winning producer Matt Leigh. Singles from the album were featured on sites such as American Songwriter, For the Love of Bands, Grateful Web, and DittyTV.

Kray Van Kirk – 9/10: A singer-songwriter from Alaska, playing six-and twelve-string guitar. Kray walked away from his first stint in graduate school to pursue music and spent the next five years living in his van, playing up and down the western United States before finally settling down in the far North.

Steve Wood and Beth Wood- 9/17: Known for their soulful, open-hearted, feel-good music, this couple has been performing together since 1970. Their many achievements would include; members of legendary band Honk, who toured with The Beach Boys, Loggins and Messina, Chicago, etc. and made 3 albums on major labels, live and recording appearances with Jackson Browne, Kenny Loggins, Sting, George Harrison, The Moody Blues, Paul McCartney and… well you get the idea.

Jenner Fox – 9/18: Jenner is a storyteller. His music is full of love, compassion and curiosity. The characters are relatable because they’re real folks. His stories are sincere and draw you in because they’re your stories. His songs make it clear that he is a true listener and observer of the world around him.

Kat Reinhert – 10/15: Reinhert writes songs that blend the complexity of jazz harmonies to the lyrical prosody of a singer-songwriter in an easily accessible aural palette. As a lyricist, she draws from both real-life experiences, as well as those made from whole-cloth or sparked by watching the world with through the lens of an observer.

For more details on these events, visit the HAYLOFT Dragonfly Barn website!