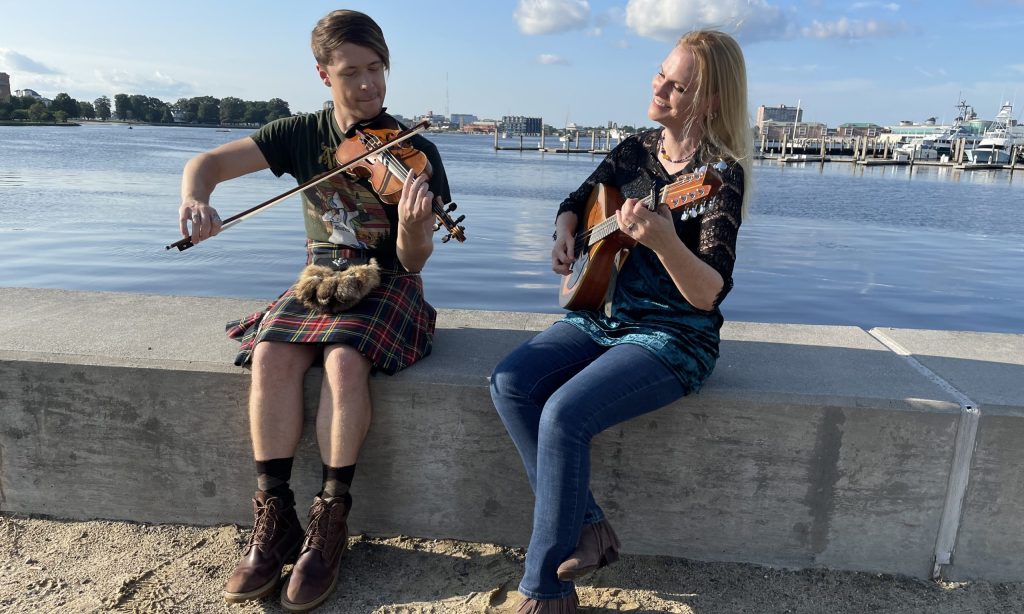 Seán Heely and Beth Patterson bring a high-energy repertoire to the table, largely consisting of Scottish and Irish tunes and songs.

The two met during one of her gigs in Norfolk, VA in 2020 and since then they have been creating new music together as well as breathing new life into their vast Celtic music repertoire.

Beth Patterson has played bouzouki (an Irish adaptation of a traditional Greek instrument) professionally for thirty years. She has been featured in various lineups, ranging from traditional Celtic to myriad genres that typically don’t include the bouzouki, such as Cajun, blues, and metal. She began touring as a founding member of The Poor Clares before setting out on a solo career as a singer-songwriter.

Beth studied traditional music and ethnomusicology with Micheál Ó Súilleabháin and Mel Mercier at University College Cork, Ireland, and hold a Bachelor’s degree in Music Therapy from Loyola University, New Orleans. She has performed in twenty countries and appeared on over two hundred recordings, including eight solo albums of her own.

Champion fiddler and singer Seán Heely is one of the most creatively versatile and captivating young artists of his generation. He is a U.S. National Scottish Fiddle Champion, an award-winning Irish fiddler, and a singer in the folk and Gaelic traditions of Scotland/Ireland. He holds a degree from the University of South Carolina in Classical Violin Performance and was a 2019 Artist-in-Residence at Strathmore Music Center in Maryland. An in-demand educator, he is on the adjunct faculty at American University and has been on the faculty of several music camps all around the U.S. Seán has performed with music icons such as Liz Carroll and Bonnie Rideout and continues to share his rich Celtic heritage with audiences around the globe. His debut solo album “Edge of the Bow” and duo record “Home Port” with Colin McGlynn as the Glencoe Lads have received critical acclaim.