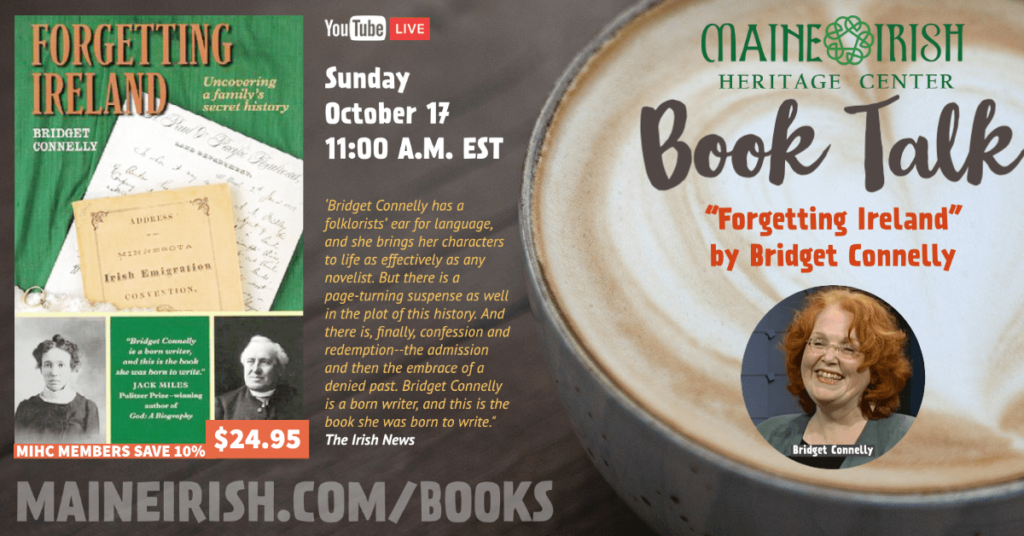 Join us for an exclusive talk with Bridget Connelly, author of Forgetting Ireland.

Forgetting Ireland is both a history and mystery, a story of western Ireland’s Connemara coast and of Graceville, a small town in western Minnesota where Bridget Connelly discovers her Connemara past. As Connelly uncovers the deliberately suppressed history of her family’s emigration, she exposes an old scandal that surrounded the settling of the land around Graceville, one that pitted Masons, Protestants, Germans, and Yankees against Irish Catholics — and one that set lace-curtain Irish against the Connemara paupers. In this compelling combination of history and memoir, Connelly tells stories of an epochal blizzard, a famous Irish bard, an infamous Irish woman pirate, feuding frontier communities, and an archbishop’s questionable legacy. She also learns why her family tried so hard to forget Ireland.

This book resonates with our own genealogy projects here in Maine because Minnesota was another landing spot for the Connemara Irish. In addition to Bridget Connelly’s discussion about her own family search, we’ve put together a panel of experts to talk about Irish immigration from the Connemara, DNA testing as a game-changer, and anecdotal stories about the Irish in Maine and Minnesota. Don’t miss it.